WA Branch Posted on July 22, 2016 Posted in Symposium Tagged with Alister Christie
Alister Christie from LearnDelphi.tv is presenting at the Australian 2016 Symposium
Find out more about Alister in this video interview. 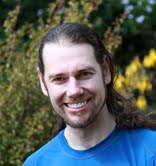 Alister’s presentation will give an overview of the current state of computational power including Parallel / Threaded programming and Distributed Computation for Mandelbrot set and fractal calculation.  He will demonstrate this with a cross-platform solution and a live deployment to the Android app store
Scott Hollows (left) interviews Alister Christie (right)
6 things you didnt know about Alister
* He develops legal practice management software by day, then changes into his super suit at night to create Delphi videos (seriously … he has a super suit)
* He has created 100+ of free videos and 30+ hours of premium videos
* He has presented at most of the CodeRage events
* He was a presenter at the 2013 Australian Symposium
* He plays guitar, works out, practises martial arts and lives on a lifestyle farm block
* He does all this while listening to large numbers of audio books on speed playback <– thats his super power